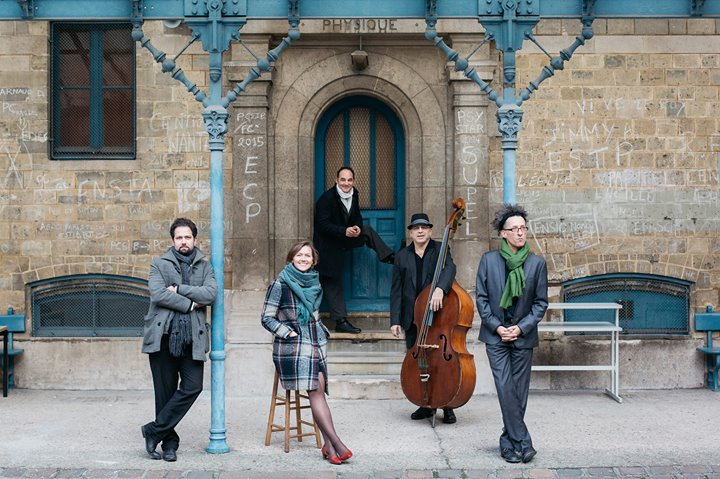 Over the past century, the blues gave birth to rock ‘n’ roll and influenced a constellation of other genres, from rock to country, soul and jazz. From unbridled joy to deep sadness, no form of music communicates more genuine emotion. Humming the blues to every beat of her step, Viktorija Gečytė and her international quintet will share with you their own authentic interpretations of the blues, from Bessie Smith to Thelonious Monk to original compositions.

Viktorija Gečytė has been bathing in music since her childhood. She premiered in public at age 5 in her native Lithuania and was regularly featured on TV for many years. After graduating from Lafayette College in the United States, she settled down in Paris, performing regularly at local clubs and festivals. Since 2008, she’s been touring the US and Europe with the distinguished American double-bassist Gene Perla, formerly with Elvin Jones, Sonny Rollins, Sarah Vaughan, Nina Simone, and many others. Elegant, smart and sophisticated beyond her years, Viktorija bears comparison with the greats. She has great phrasing, impeccable timing, a low velvet voice with smoky hues, and hits every note on the button. “A class act,” says the Edinburgh Jazz & Blues Festival.

Born in Paris, harmonica master Laurent Maur started his musical apprenticeship in blues and rock bands in his late teens. He changed his orientation to jazz when he was 24 and soon, with encouragements from Toots Thielemans, produced his first record. During his studies at the French violinist Didier Lockwood's Jazz School (CMDL), he joined the band of Orlando Poleo, an accomplished percussionist from Venezuela. Together, they toured Europe and Latin America. In 2010, Laurent moved to Asia and spent six years touring across China, South Korea and Taiwan as leader of his own bands, featuring prominent local musicians. Winner of several international harmonica competitions in Germany and Poland, he’s also a thrilling soloist and composer.

Representing the South of France, Yoan Fernandez picked up his first guitar at the age of 7. He started studying classical and flamenco music at the Conservatory of Béziers-Mediterranean and soon developed an interest in electric guitars. Formerly a jazz student of bass player Peter Giron, today Yoan is a teacher himself and an incredibly creative and versatile musician. He has been accompanying French and international bands across different genres, including jazz, blues, latin and chanson française. In 2012, Yoan represented a jazz collective from Southern France on a trip to New York, where he participated in masterclasses with Steve Coleman and Dave Liebman and performed alongside Ari Horeng.

Originally from New York, double-bassist Peter Giron started playing as a professional musician when he was 16. During the 1970’s, he played in Broadway musicals. Later, in various blues, motown, jazz and latin groups in New York and all over the USA, with musicians such as Charles Earland and John Purcell. From 1989 to 1994, he was the bass player of American Blues Hall of Fame guitarist Luther Allison, performed with him in many festivals and world tours, and collaborated on two of Allison’s albums. Since 1994, he’s been accompanying various artists in French and international festivals, including Kurt Elling, Rick Margitza, Steve Turre and Ernie Watts. He’s also the co-founder and co-director of the International Music Educators of Paris (IMEP) college of music, in association with the Berklee College of Music and their International Network.

Paris-born Mourad Benhammou is, at the origin, a self-taught drummer. He started working in Parisian clubs in 1992 at the age of 23, perfecting his musical skills over time with established musicians, such as tap dancer Jimmy Slide and drummer Sunny Murray. A few years later, inspired by the music of Sun Ra, he formed his first band, “The Interplanetary Music Orchestra,” a nonet with American saxophonist Steve Potts and French trumpeter Alex Tassel. Since 1996, Mourad has been accompanying major French musicians and international veterans, such Bobby Few, Cedar Walton or David Murray, at premier venues and festivals worldwide. Mourad is also a jazz erudite and collector. Fascinated by jazz history, in 2004 he traveled to interview several prominent NYC bop drummers. One of them, Walter Perkins (Charles Mingus’s drummer in the famous record “Mingus Mingus Mingus Mingus Mingus”), became his mentor. This experience inspired Mourad to start a new hard bop band, the “Jazzworkers,” which has since released two albums.